“Great Beginnings” is one of the musical parlor games here at snowonmusic.  In this game, the challenge is to identify a well-known piece or movement in the ‘classical’ repertory–given only the first note or chord!

If you’d like to play, do not wait, do not pass go, click on the link below to navigate back to Great Beginnings 1.

It’s the first chord of Beethoven’s Symphony #1 in C.  At the time, this beginning was the focus of some critical disapprobation; “My dear, it begins with a perfect cadence upon the subdominant!” complained one aristocratic musical amateur.  (Or so, at least, I seem to recall reading sometime in the distant personal past.)  Famously, one critic–no-one ever seems to say who, and perhaps the name has been lost over the years–called the symphony “a caricature of Haydn pushed to absurdity.”  It’s easy to laugh at that now, but in fact the comment is not without insight:  Haydn had in fact enjoyed the musical joke of beginning with a cadence–the musical equivalent of starting a sentence with a period.  But it took Beethoven to ‘push’ the joke that bit further by placing that cadence in the ‘wrong key.’

Here’s how the whole phrase makes its way to the dominant–and in the correct key: 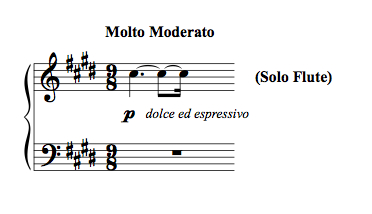 How many symphonic works begin with an unaccompanied flute solo?  (That could be a parlor game of its own, but perhaps one better suited to a blog where flutists hang out.)

I don’t know the answer to that–off-hand, I can’t think of another example, though I’m reasonably sure that there must be some others–but I am sure that this is the most famous example.  Despite the popularity of many of Debussy’s other orchestral works (most notably La Mer), historians have called the Prélude à l’après-midi d’un faune “Debussy’s most celebrated orchestral work”  (1894.)  Though not uncontroversial, it was a popular success from its premiere.

Here’s how the flute solo continues:

Blogger James Roe comments:  “The melody begins on a sustained c-sharp, a note played on the flute with all the fingers raised, no keys depressed. Debussy, the musical colorist, knew the gauzy diffuseness the flute could produce on this note and used it to great effect, subtly blending the beginning of the piece with the silence preceding it.”

This is another famous chord:  one of the first prominent examples of the use of a dominant ninth chord.  It comes from the Violin Sonata in A by Franck (1884.)

It’s quietly ironic:  the chordal sonority is a dissonance, quite unusual in its time, yet the musical idea is serenely simple.  Here’s a little bit more of the introductory piano ‘vamp’:

This is the beginning of one of the great music dramas of Richard Wagner–Tristan und Isolde.

The first chord has become known as the ‘Tristan chord’, though from a technical point of view it is really an unusually prolonged appoggiatura to a French augmented sixth.  (And if memory serves, enterprising historians have found a very similar precedent somewhere in the work of Spohr.)

Even that first cello note–it is to be played on the open ‘A’ string–attracted admiration.  Lalo–again I write from memory here–said that it was a sound he had been awaiting for years.  Years later the famous conductor Bruno Walter would write about his first hearing of this work in 1889:

So there I sat in the topmost gallery of the Berlin Opera House, and from the first sound of the cellos my heart contracted spasmodically… 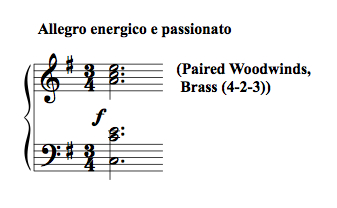 This is perhaps the least ‘famous’ of the great beginnings, though it’s drawn from a very-well known, well-loved and respected work by a major composer–Johannes Brahms.  Like the Beethoven (and for that matter, the Franck) it’s an example of a non-tonic opening sonority–here, the subdominant chord.  The continuation:

It’s the passacaglia theme which forms the basis of the fourth movement of the Symphony 4 in E minor.  (This would be Brahms’ final symphony, which I suppose that makes it a fitting bookend to the Beethoven, which opens his very first symphonic movement.)

The Symphony is nicknamed “the Tragic” for its extremely passionate and serious character.

There’s a literary parlor game: can you name a famous novel from just its first word? It sounds impossible, perhaps, but some novels have opening lines famous enough to make this a potentially amusing pastime. For example, for those who know their classic American novels, the challenge word “Call” might elicit the opening sentence of Moby Dick: “Call me Ishmael.” Or–staying with English, but not America–“It” might well evoke Dicken’s famous “It was the best of times, it was the worst of times,” from A Tale of Two Cities.

You can see that there are a few conditions needed for this to work as a game. The novel must be well-known, it must have a distinctive opening line, and it must not give away too much (by, say, beginning with a prominent character’s name.) Ideally, there should be only one solution–though that is perhaps not necessary. Jane Austen fans, presented with “It,” would surely recall not Dickens, but the opening sentence of Pride and Prejudice: “It is a truth universally acknowledged, that a single man in possession of a good fortune, must be in want of a wife.”

It–there’s that word again–occurred to me that the same thing would work with music. Indeed, it might work better, as the first sonority of a piece, notated, actually contains a great deal more information than just a single word, and is more distinctive. In addition to the actual sonority, there’s the relation to the key signature, there’s the language(s) of the tempo direction and expression marks, and there’s the instrumental designation–all can furnish helpful hints. Hence, “Great Beginnings.”

Below, I’ve quoted five beginnings–either of a whole multi-movement work, or (in one case) of a movement of one. Each is a celebrated opening, noteworthy or at least memorable in some fashion. How many can you name?

I’ll reveal answers in a subsequent post–say, in a week or two. An additional challenge: can you propose any “Great Beginnings” of your own?